SEVERANCE at The Tank
Brunch Away from BRUNCH at EST: PLEASE NO MORE PARTIES

"During the course of a 60-minute hot yoga class, two men breathe. They tighten their core. They visualize their chi. They express a desire to change. They accept humiliation. They are good. They are bad. They are rotting. The world is not better for them having been in it." 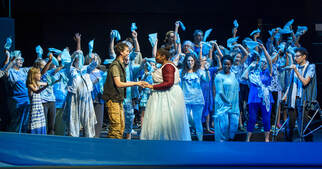 Brendan as JOHN in Once Upon a Time in the Berkshires
Brendan spent the summer at the Williamstown Theatre Festival, as part of the Non-Equity Company, where he appeared in Tar and Feather (directed by Estefanía Fadul), performed an original song in the Late-Night Cabaret (directed by Cody Owen Stine, hosted by Jane Kaczmarek & Thomas Sadoski), and appeared as JOHN in the Community Works show, Once Upon a Time in the Berkshires. The world premiere production was written by Lucy Thurber, and directed by Laura Savia. ​